Bekan man Sean McHugh and Co-Driver Niall Morley took a respectable 38 place overall on the 2010 Banna Mini Stages Rally Co. Kerry. The two Mayo & District Motorsport Club members were the sole Mayo competitors to tackle the tough event on the Kerry coast.
After a long drive to Kerry and an uneventful recce of the stages on Saturday, the team took an early night in preparation for the gruelling rally the following day. A reasonable eleven o clock rise on Sunday morning allowed the more social competitors a sleep-in but Sean, Niall and the team were up early and ready for road.
This is the second time that Niall has navigated for Sean and the pairing seems to have really hit it off gaining confidence and speed with every stage. It has been an unlucky year for Sean who didn’t finish five out of seven events that he started due to mechanical issues, so he was really hoping for a good result in Kerry to finish the year on a high point.
Unfortunately Lady Luck was not on their side, as on the road section to the first stage the car developed a misfire. This was a disastrous occurrence. They crawled through the first eleven-kilometer test losing buckets of time on their rivals in the process. 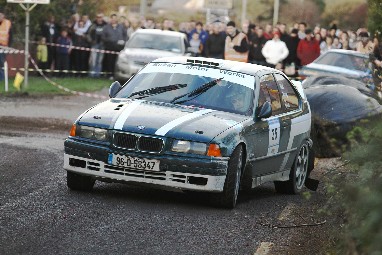 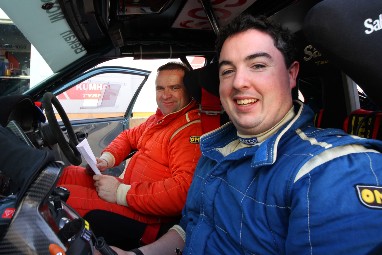 The wounded BMW limped back to the first service in Ardfert where the team descended on it to try and rectify the problems. The short twenty-minute service was too short however and the team could not cure all the cars ailments.
Even though the car was slightly better the pair found themselves running well down the order among slower competitors and this further hampered them as they were held up. A reasonable time through the second and third stage saw them claw back some valuable places on the leader board. This was not helped by an uncharacteristic mistake by Sean that saw the pristine BMW mount a Kerry ditch, with minimal damage but some time loss.
They arrived at the second service halt in 40 place overall, a remarkable achievement in the face of great adversity. Luckily the team was able to diagnose the problem with the engine and rectify it inside the allotted time. It was all too late for Sean and Niall, with only one stage remaining they would not be able to make sufficient time back on their rivals.
But with the car now in perfect condition the Mayo men blasted off the start line of the final stage with a point to prove. Within a short number of kilometers they caught and passed a slower competitor. They pressed on as fast as they dared catching and passing another car before the end of the end of the stage. The glorious sounding BMW echoed between the Kerry hedgerows as Sean wrestled with the steering, the powerful car difficult to handle in the wet and slippery conditions.
The sterling drive on the final stage saw them climb another two places on the leader board to a admirable 38 overall considering all the mechanical maladies it begs the question what could have been?
Sean and Niall were quite happy at the finish of the event, relieved to have finished as it had been a tough day of rallying, “The stages were very slippery, it was a pity about the mechanical problems but that’s rallying!”
It was quite a successful trip for the Mayo men as they claimed 5 in class and 38 overall. Sean would like to thank his dedicated team, and Niall Morley who guided him excellently between the ditches on the stages.