Tune in and check out all the action on TG4, the show will also be aired as follows:

The excitement was evident as Mayo & District Motorsport Club gathered in Óstán Oileán Acla last Friday night for the launch of the Óstán Oileán Acla/Connacht Print & Signs Mayo Stages Rally 2017. Guests arriving for the Achill People of the Year Awards which was also taking place in the Óstan got a preview of what’s in store on Rally weekend as they inspected a fine array of rally cars on display in the car park for the launch.
Clerk of the Course Trevor O’Connell kicked off proceedings by officially welcoming everyone to Óstán Oileán Acla, which will be Rally Headquarters for the weekend of the 11th and 12th March. He welcomed all the sponsors and had a special welcome for Andrew Mullen, MD of ‘Sligo Pallets’ who travelled from Sligo and Brendan Flynn from the ‘Border Championship’ who travelled from Monaghan especially for the night. The Mayo Stages Rally has been the first round in the ‘Sligo Pallets Border Championship’ for the last number of years and their support is much appreciated. Trevor thanked Cathal McLoughlin and his staff in the Óstán Oileán Acla for all their assistance and support in the lead up to the event, he welcomed joint title sponsor, David Devers, Connacht Print & Signs to the Island and thanked him for his ongoing support of the Mayo Stages Rally.
Trevor explained that the final touches are being put in place to ensure the Rally runs as smoothly as possible and that it will be a weekend to remember for the competing crews, spectators, sponsors and most importantly the local residents who have been so accommodating and welcoming to all. He added that without local support and sponsorship, it would not be possible to run the Mayo Stages Rally and he thanked everyone who has come on board – sponsors of Service Area, Marshal Meeting Points, Programme Sponsors, Stage & Scrutiny Sponsors. The weekend is a free family friendly event, one not to be missed and he asked that everyone support the sponsors as without their generosity events such as these would not be possible.
Trevor also welcomed Mary Gallagher and Emmet Callaghan of Achill Tourism and thanked them for their assistance and guidance in promoting the event. Emmet told all assembled that the Mayo Stages Rally will kick start the 2017 Summer Tourism Season in Achill and they are all looking forward to the Rally weekend. Trevor thanked Sgt Brian Murphy, his team in an Gardai Síochana and Mayo County Council, in particular Gerry McDonnell and Councillor Paul McNamara who have been very helpful. Wrapping up the formalities Trevor thanked his Deputy Clerk of the Course local man Peter McManamon and all the team for all their support and hard work and said they were all looking forward to the big event on the 11th/12th March. If anyone would like to help out over the weekend they can contact Trevor, Peter or any member of the Rally Team through the Motor club’s Facebook, Twitter or website. 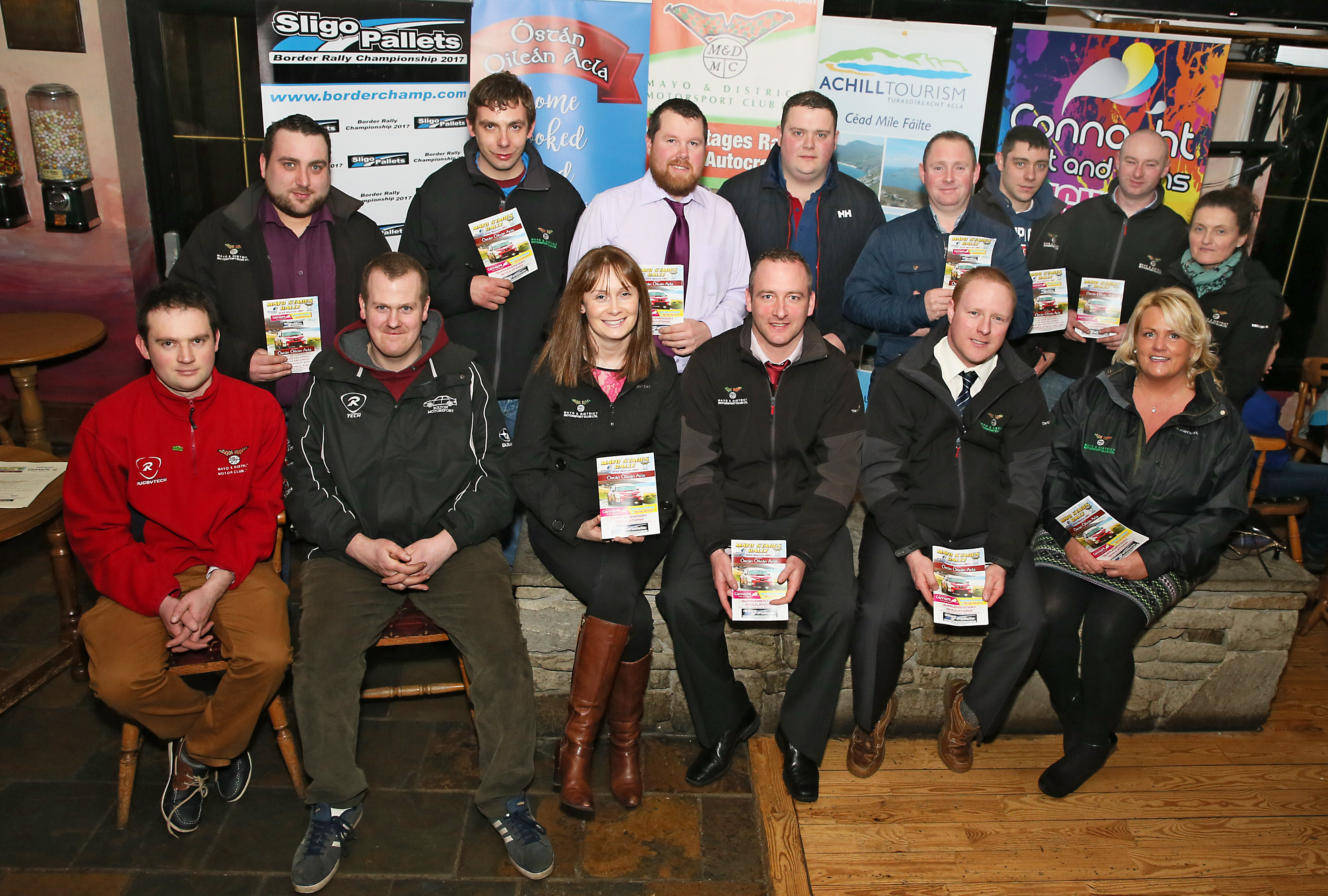 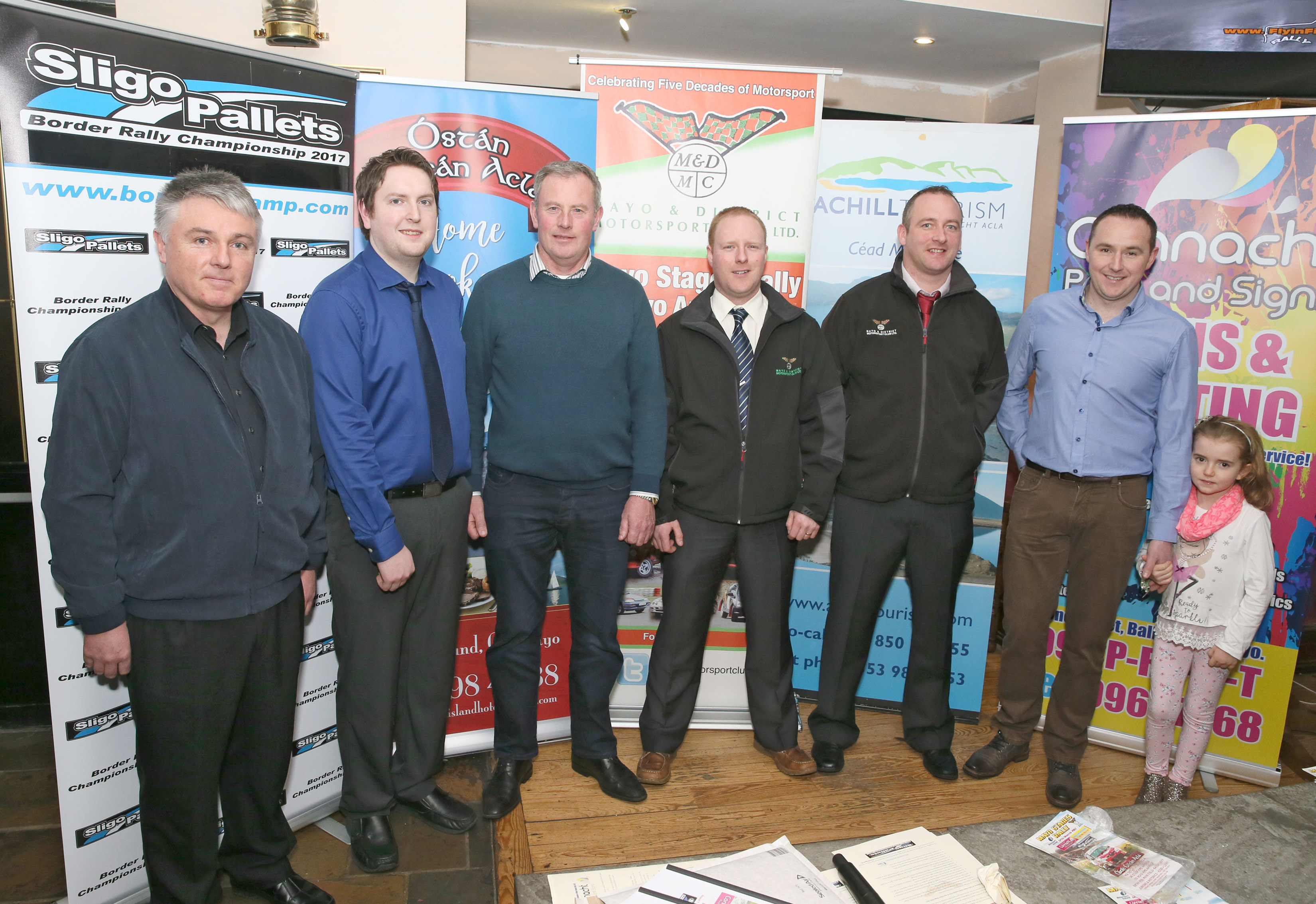 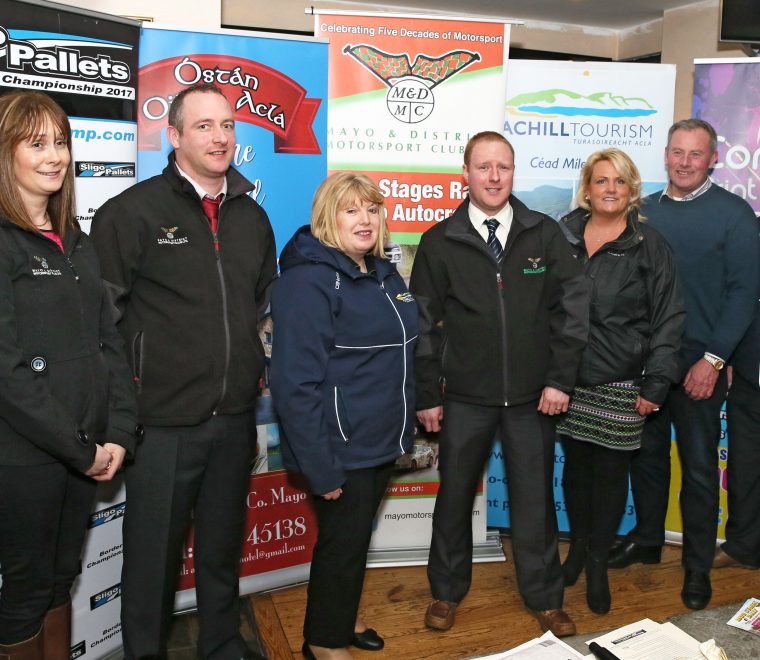 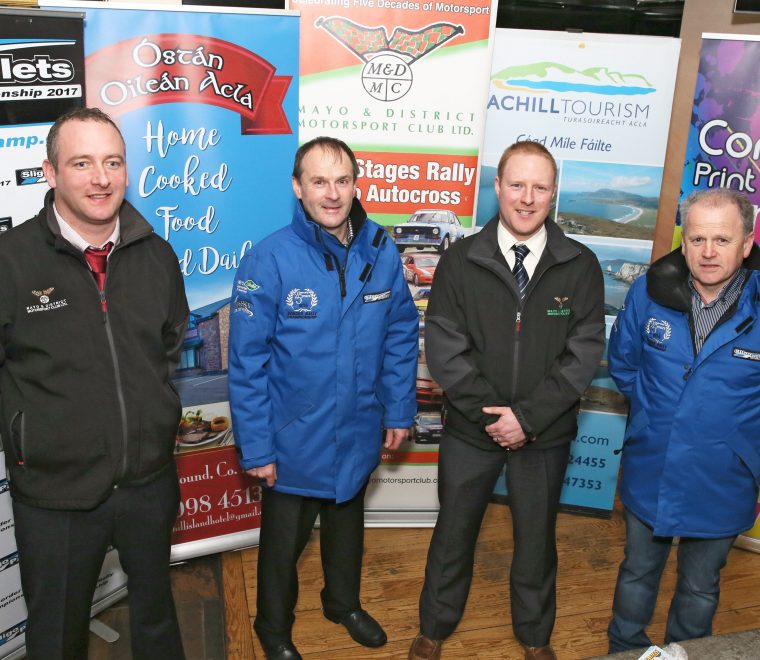 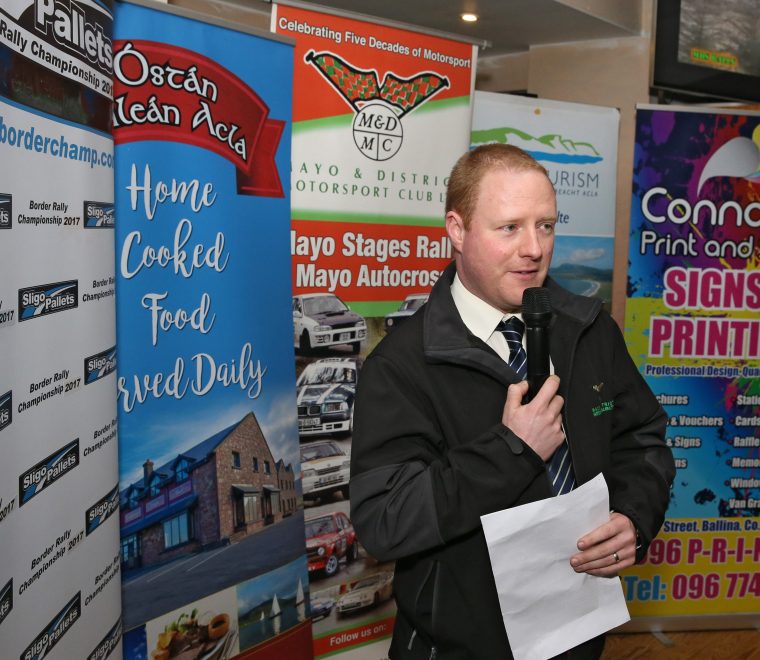 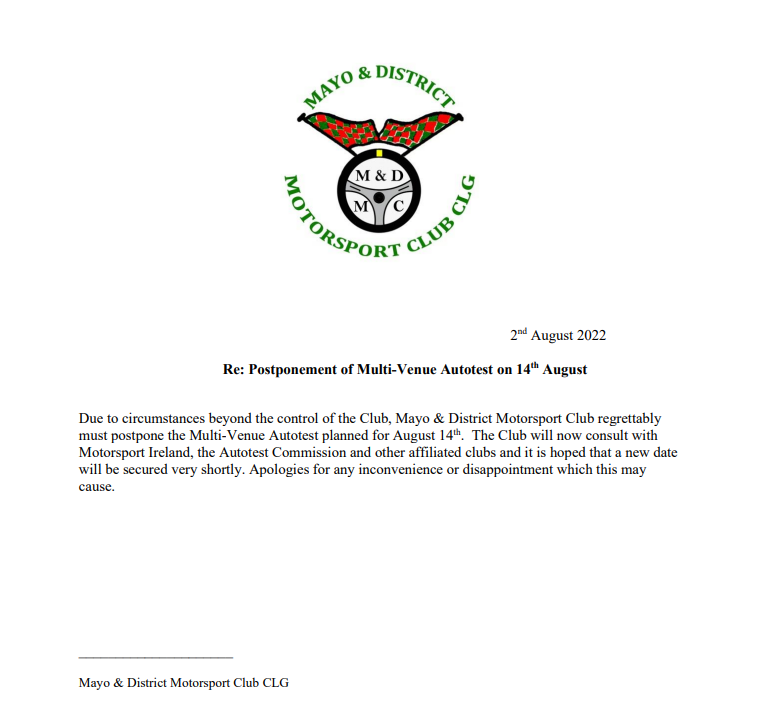 Mayo & District Motorsport Club, organisers of the Mayo Stages Rally have announced details of this year’s rejuvenated event which will take place on Sunday 6th of March.

The 2022 event will be counting rounds of the:

Renowned Rally man Killian Duffy has taken on the role of Event Director. Killian, who is very much respected in the world of rallying for his forward-thinking and vast motorsport experience, has put together a strong organising committee lead by Padraic Roche as Rally CoC and operations are well under way. Killian explains: “We are going to put on a show, the best show in town, not just for the competitor but for the fans, COVID restrictions have had major implications for everyone and we are going to put together an event that on the run up to, and over the course of Rally weekend will have something for everyone to enjoy. All activities including Scrutiny, Service, Rally H.Q will all be in close proximity to the stages, the Rally itself will offer 100km of technical and challenging stages that will test each competitor to their full ability over a compact loop of 8 stages, as we offer a cost effective and competitor friendly event. A big aim is to make the Rally easily accessible to the fans both young and old with many events including a ceremonial start in the in the vibrant town of Claremorris, plans are at an advanced stage to create a festival atmosphere on the weekend of the Rally”.

Mayo & District Motorsport Club are proud to welcome the Rally Sponsor, headed by local man Danny McHugh who spearheads McHughs – Spar – Texaco – Insomnia – Supermacs, Ballindine. Speaking at McHugh’s Ballindine’s facility recently Danny said “We are thrilled to have the opportunity to once again work with the Mayo Stages Rally, we know the appeal of Mayo as one of Ireland’s premier Rally events. It gives a major boost to the businesses of the area and the local economy. The coverage alone is broadcast worldwide and the exposure is fantastic for the visibility of our brands. We are established here in our Ballindine site since 2006 and we and are widely known as the perfect motor stop where customers are always greeted by friendly and efficient staff”.

Features of this year’s event:

Regs and online entry will be available in the coming days; full details will be on the club website www.mayomotorsportclub.com 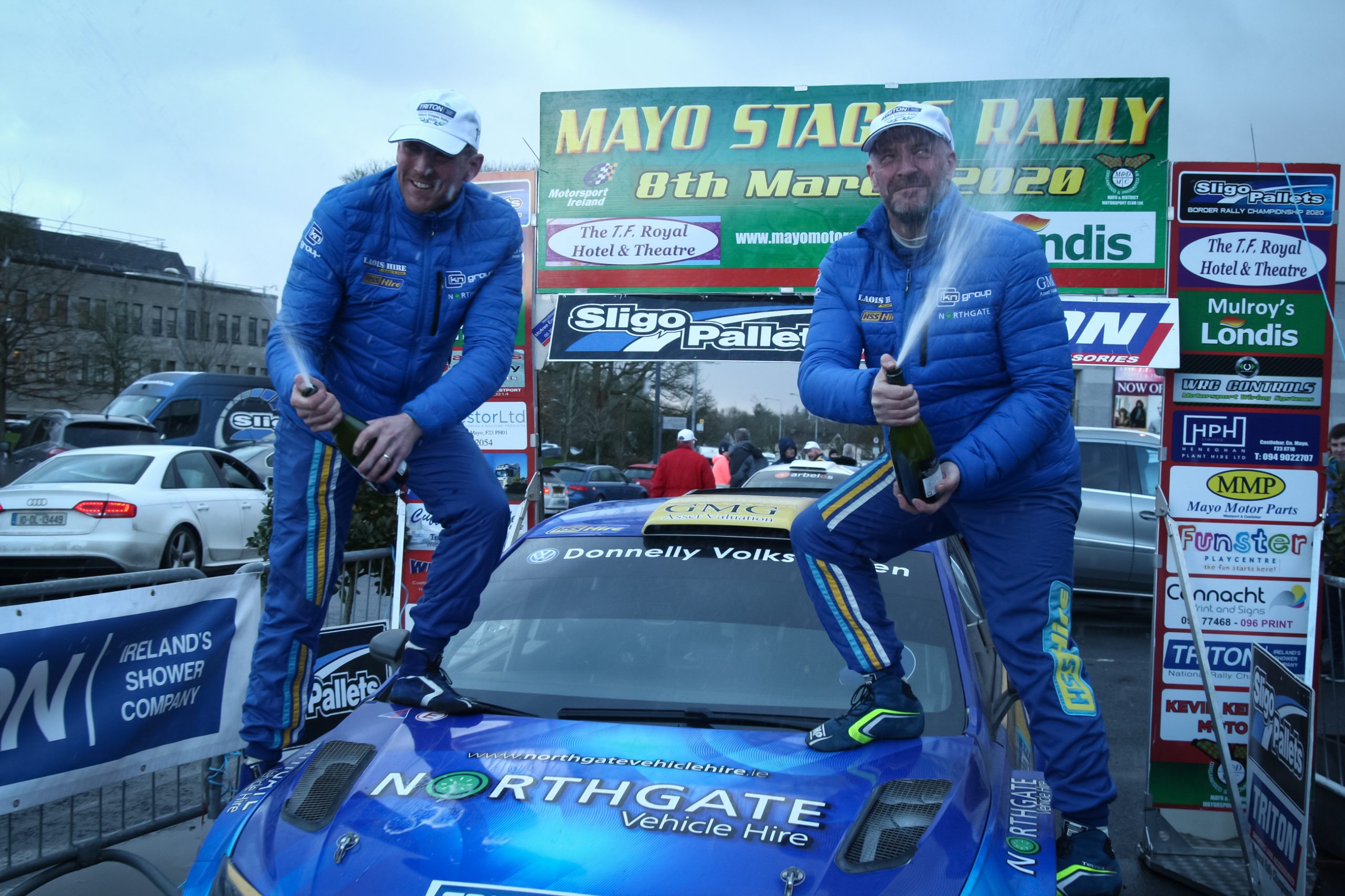 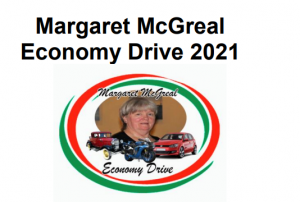