With fastest times on all but one of the nine stages Fermanagh’s Garry Jennings and his Letterkenny co-driver Rory Kennedy (Subaru WRC) took a facile victory in the Hotel Ballina – Kennedy Motors Mayo Stages Rally, the first round of the Triton Showers National Rally Championship and also the opening round of the Sligo Pallets Border Rally  Championship.

Also securing the three points from the ‘Triton’ Power Stage, they finished a minute and 34.8 seconds ahead of the Subaru of Peadar Hurson/Damien Connolly.  Niall Maguire/Enda Sherry also in a Subaru WRC were 41.2 seconds further behind in third.

Jennings was quickest through the opening stage north of Killala where he was 12.3 seconds ahead of the Subaru WRC of Niall Maguire with Peadar Hurson half a second further behind in third.  Fractions of a second also separated the Ford Fiesta WRC’s of Roy White and Declan Boyle with top two-wheel drive competitor Gary McPhillips completing the top six.  Paddy McVeigh, Aaron MacHale and Stephen McCann failed to finish the stage.  McVeigh’s Subaru stopped with gearbox troubles while McCann never made it to the stage start after the radiator of his Subaru burst.  MacHale, damaged a track control arm after hitting a rock that had been pulled out by a previous competitor, shortly into the stage.

Jennings was also quickest through the second and third stages of the opening loop and arrived at the Ballina service with a lead of 48 seconds.  In wet and slippery conditions Jennings took command although he did have a moment on the third stage when he clipped a rock that knocked the rear left wheel off camber.

Second placed Maguire stated he was pushing hard to try and stay with Jennings.

Another former champion Peadar Hurson was troubled all through the loop as his Subaru cut out intermittently on the straight stretches, he was 14 seconds adrift of Maguire and just 1.5 seconds ahead of the Ford Fiesta WRC of Roy White, whose windscreen misted over on the latter part of the second stage and all though the third stage.

For former champion Declan Boyle the situation was even more serious as he traversed all three stages with a misted windscreen.   Meanwhile, Gary Kiernan in sixth led the two-wheel drive category. On the third stage he had to contend with a water bottle on the floor of his Escort, he was 9.2 seconds ahead of the similar car of Damian Tourish, who was seeded at 54 and occupied seventh.

In Group N, Shane Maguire (Mitsubishi) led the way 15.3 seconds ahead of the Subaru of Paul Barrett with Trevor Bustard (Mitsubishi) three tenths of a second further behind.   Last year’s winner of the category in the Triton Showers series Aidan Wray (Mitsubishi) was fourth.

On the repeat loop and even though he admitted that he had slackened his pace Jennings extended his advantage to a minute and 23.1 seconds.  Hurson moved into second and while his Subaru was still missing, a change of tyres proved most beneficial.  Maguire was a fraction of a second behind – he lost time when his Subaru aquaplaned and then hit a chicane damaging the front of the car.

Having lost fourth place when his Fiesta WRC had an altercation with a bale, Roy White reclaimed the spot a stage later.    Meanwhile, Declan Boyle, who occupied fourth after S.S. 4, retired on the sixth stage with transmission failure.

His demise elevated the impressive Damien Tourish, (Escort) into fifth place, he commented at the Ballina service, “I’m having a good steady run.”  Cavan’s Gary Kiernan (Escort) was 7.4 seconds behind.  Ed O’Callaghan (Escort) made great improvements in his stage times to hold eighth followed by Frank Kelly (Escort) and Group N leader Shane Maguire (Mitsubishi).  Trevor Bustard (Mitsubishi), who was 15.4 seconds behind in second place in the category, had clutch troubles though the sixth stage.

On the final loop Jennings clipped a rock and punctured on the penultimate stage, he was quickest through the Power Stage to take maximum points.

Hurson finished second despite the electrical issue to that proved problematic all day.  Third placed Maguire spun at the finish line on S.S. 7 and burst a tyre of the penultimate stage.  Fourth placed White was second quickest on the Power Stage. Tourish punctured on S.S. 8 and retired as Kiernan (Escort) went on to win the rear wheel drive category and finish fifth overall.  Shane Maguire had an untroubled run to take the Group N award.

Winners of the inaugural Margaret McGreal Trophy for first local crew home were a delighted Barry Cuffe from Castlebar & navigator Stephen McGing from Westport. They steered their Escort home just ahead of Ballaghaderreen man Derek Bolton in his Subaru who had Lorcan Moore on the notes for the first time. The pair just missed out on the big local prize but were delighted with 2nd in class 15.

Another local man to finish with a great result was Achill man Brian Lavelle, who won the very competitive class 1 in his Honda Civic putting in some blistering times in the process.

Colin Loughney had been leading the race for top local after the first 3 stages in his Escort but went off the road into a field on stage 4. He got back into the rally under Rally 2 rules and managed to finish 4th in class 12 and 48th overall. In 51st place was Derek McCarthy navigating for Stephen Reynolds, followed by Jared Gill navigating for Ray Cunningham in a Mini in 52nd overall. James McGreal was competing in his recently acquired Mitsubishi Evo and despite not being able to find any grip throughout the day he finished 3rd in class 15 and 53rd overall. Padraic Roche from Killala had first time navigator Aimee Smyth on board and finished 54th overall and 5th in class. Castlebar’s Padraig Conneelly and Liam Walsh finished 63rd and 3rd in class 11F in their Corolla. Crossmolina man John Duffy brought home his trusty Honda Integra to 2nd in class 3 and 65th overall. Local pairing Martin Cawley and Kenny Langan brought their Peugeot 205 home 69th Keith Jacob and Michael Carr were 71st and claimed 3rd in class 9. Event sponsor Ciaran Kennedy of Kennedy Motors was learning his new Evo 9. He had Pat O’Hora on the notes and after difficulty on the last stage they finished 72nd overall and 10th in class 4.

Unfortunately, a number of local crews failed to complete all stages due to various issues. Aaron McHale and Paul McGee were expected to be the benchmark of the locals in their Skoda Fabia S2000 but they hit a rock on stage 1 and damaged the steering. Michael and Fergal Loughney visited the scenery on stage 3 and were unable to continue

Alan Moran & David Loughney had an off road excursion early in the event. Peter McManamon and John McCarthy visited a drain on the final loop and were unable to get back on the road. 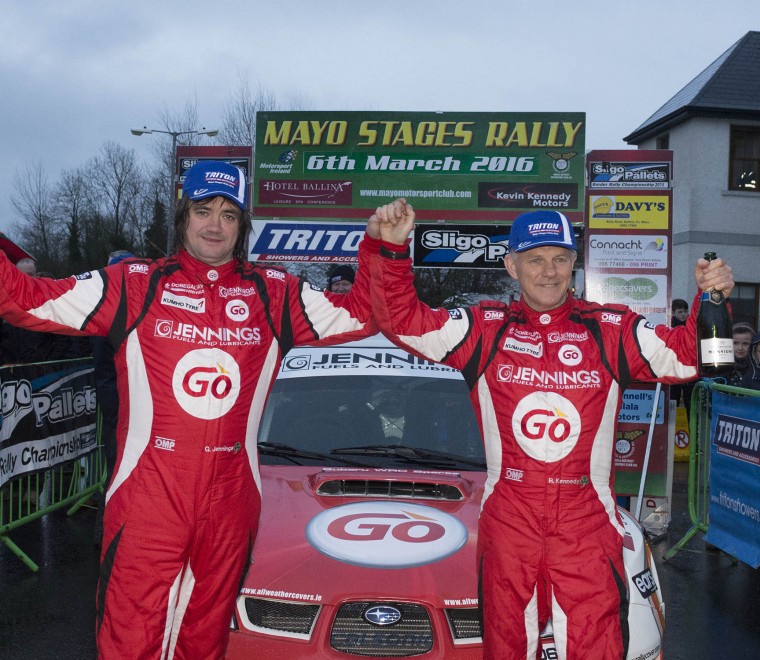 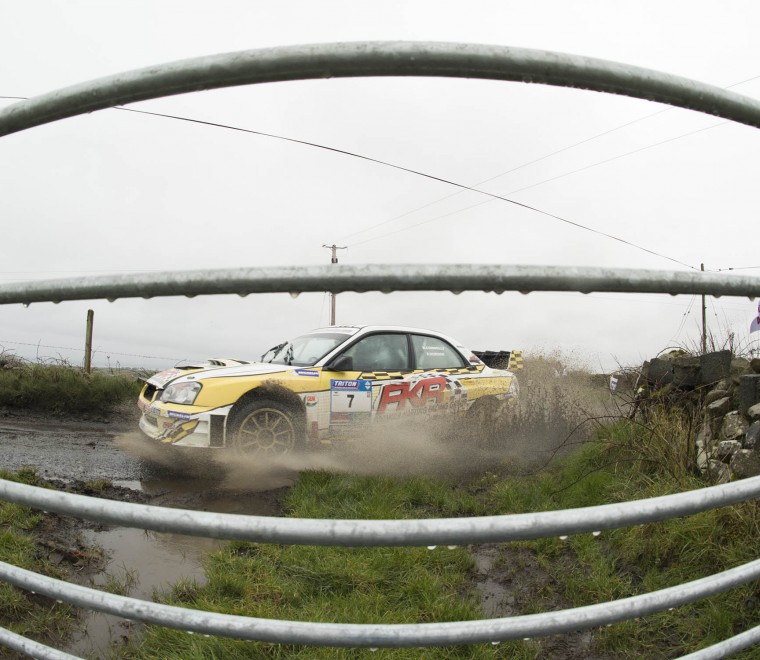 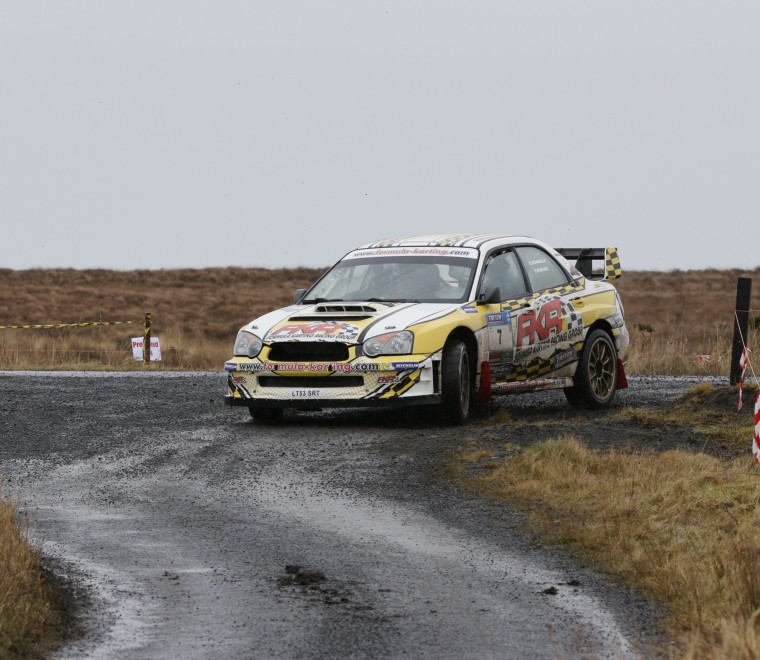 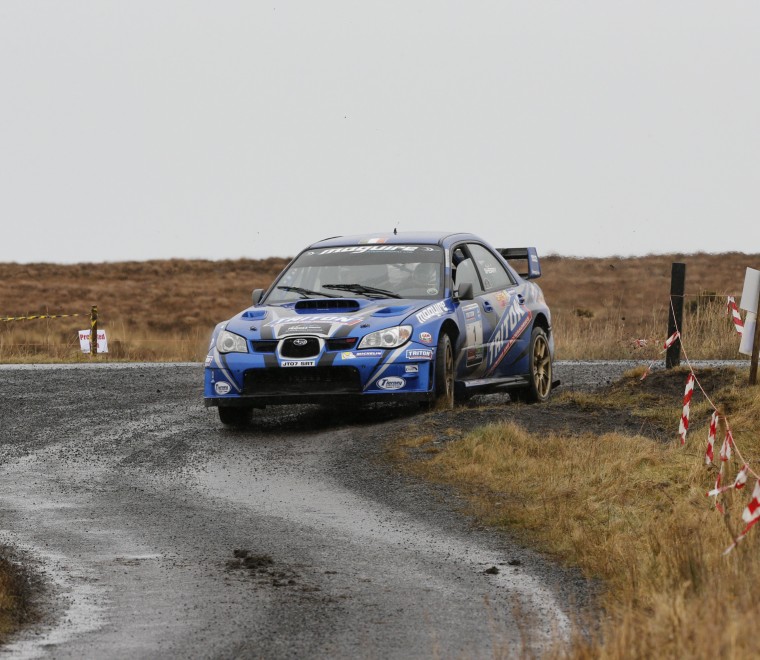 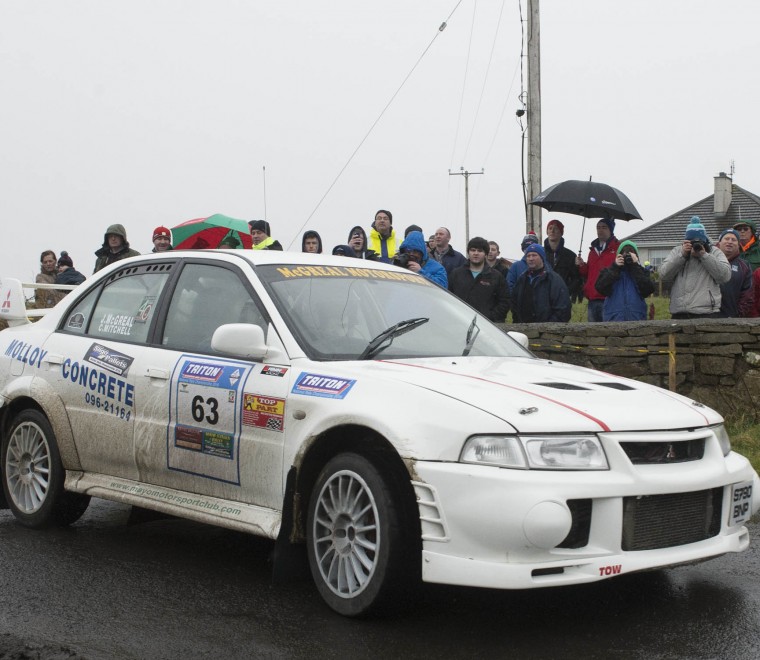 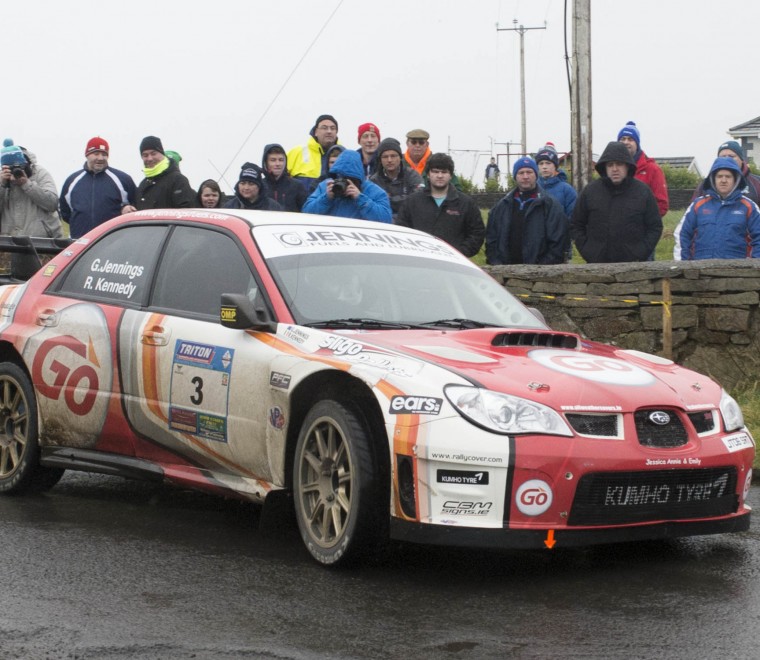 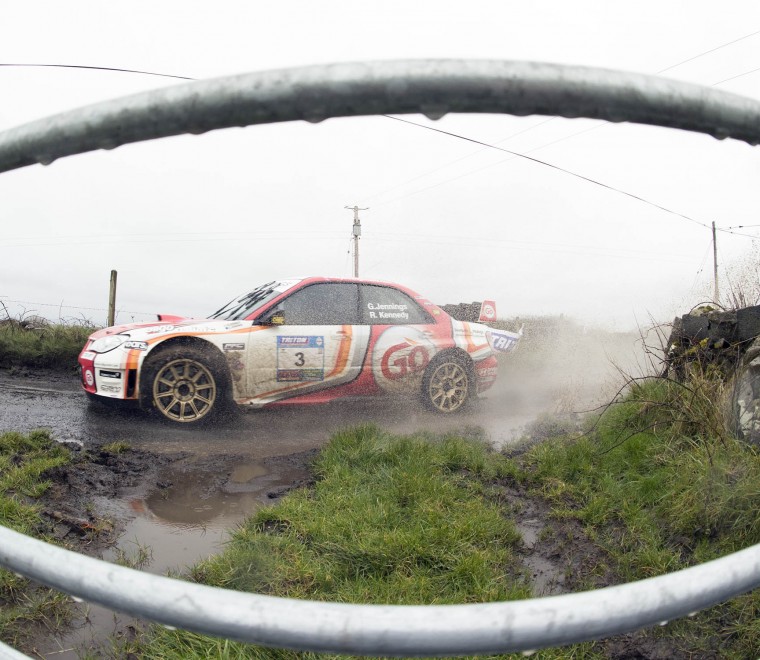 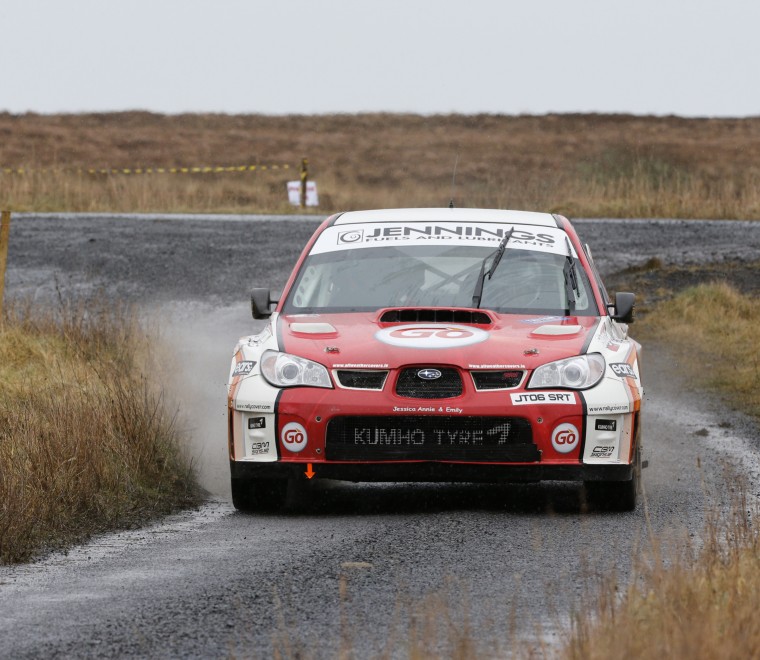 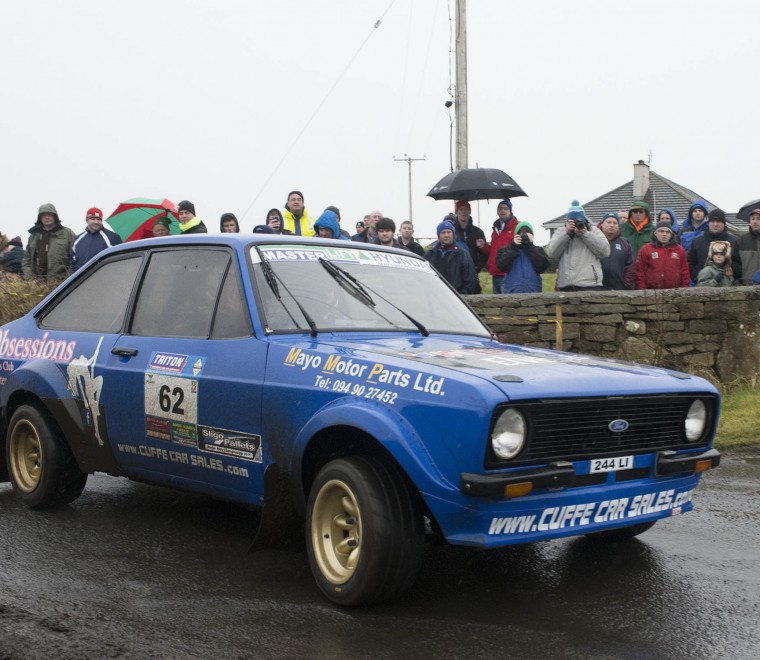 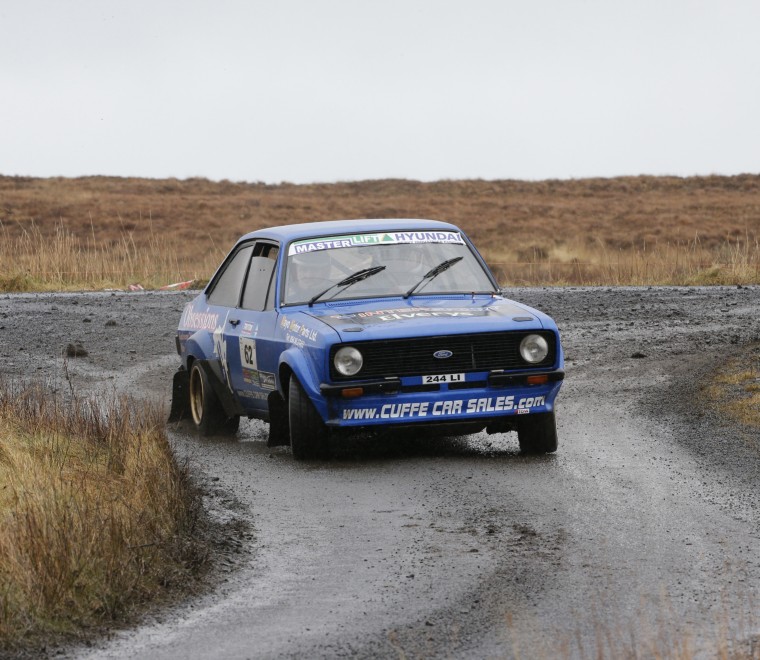