Success For Mayo Competitors on Killarney International Rally
Cathal Doyle
Carrowmore-Lacken native Paul McGee is well on his way to clinching the prestigious 2010 Kick Energy Fiesta SportTrophy (FST) Ireland Championship. It follows another successful event for the Donegal based co-driver on this week-end’s Killarney International Rally. Navigating for Monaghan’s Stephen Wright, the duo took a dominant series victory in Kerry, their third successive win from the three rounds in the FST championship to date. With five rounds from six counting towards the title, Stephen and Paul are now in a very strong championship position ahead of June’s Donegal International Rally. The winners of the FST Championship will get a Ford works supported drive in the 2010 Condroz Rally, the final round of the Belgian Rally Championship. 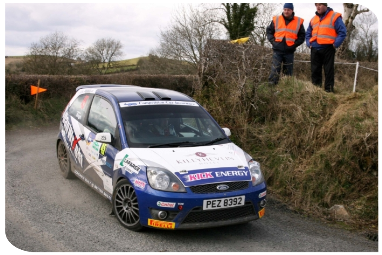 Another Mayo competitor putting in a strong performance in a one make series in Killarney this week-end was Shane Buckley. The Ballyhaunis man is competing in the Citroen Racing Trophy championship in his C2R2 Max. Despite some problems with power steering, Shane, who was co-driven by Meath’s Thomas Maguire, was consistently on the pace throughout the event, and finished in a very creditable 3rd in the series and an impressive 13th overall. Another Mayo man, David Carney is also taking part in the championship, and the young Aughagower man brought his Citroen home safely in 22nd overall in the National section of the rally.
In the full International Rally, Mayo and District Motorsport Club’s Aaron MacHale fought back well over the closing stages in his Ford Focus WRC to claim second overall behind event winner Denis Cronin. Another Mayo competitor to make his mark was Kiltimagh’s John Higgins, who co-drove Cork’s Brian O’Mahony to 6th overall as well as finishing the highest placed two wheel drive car in their Renault Clio S1600.