The Mayo Stages Rally 2010 proved to be extremely tough for all competitors, especially for all the local crews. Out of the twenty six local starters only sixteen made it back to the McWilliam Park Hotel. A testament to how challenging the event was.

First Mayo crew home were Mervyn & Derek Deane from Williamstown in there class 13 Ford Mark 2 escort. They finished the day in 13th overall and 3rd in class. An excellent result considering the stiff competition. Mervyn also picked up the coveted Eddie O’ Hora memorial for the fastest Mayo modified crew home.
Gerry Ronan was next up in his Mitsubishi Evo 6. The Bekan man put in a sterling drive to finish in an excellent 23rd overall and 3rd in class eight. He also had the honor of taking home the “Best in Bekan Award”(For the fastest crew from the Bekan Area). As the rest of the Bekan challengers fell by the way side Gerry coasted to victory. 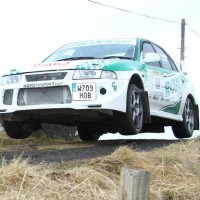 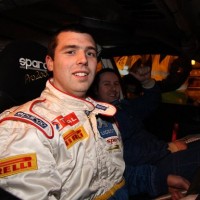 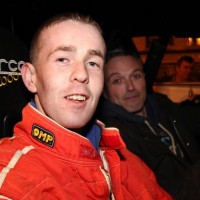 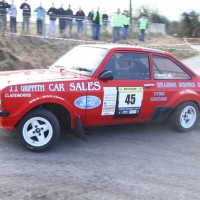 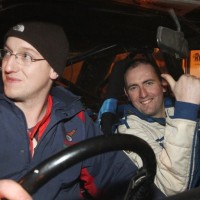 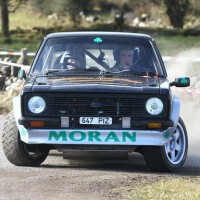 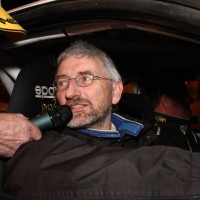 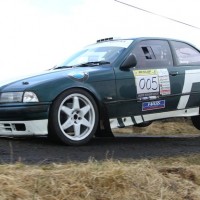 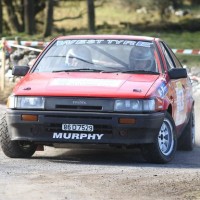 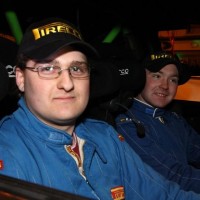 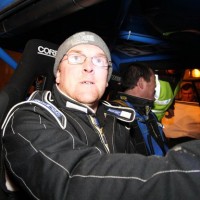 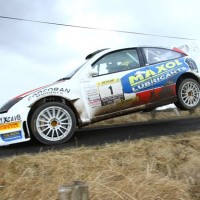 In an incredible 40th overall Fiachra Moran & Shane O’Brien from Castlebar brought their pristine Ford Escort Mark 2 home 3rd in class 12. This was an astonishing achievement for Fiachra as it was his first time ever competing in a rear wheel drive rally car. He slowly beaded himself into the car over the first 2 stages and found himself in 80th position and seventh in class. Stage 3 was a turn around for the books though the Castlebar man really put the foot to the floor as he climbed 30 places in the overall standings to be in 50th and 5 places in the class to be in second. He finished the rally 10 places higher in 40th position.
Just one place behind was Fergal Loughney from Killala. Fergal was navigating for Donegal man Pauric McGee and ably guided him through the Mayo Stages. The pair finished in 41st overall.
Walter Burke from Williamston entertained his way to 46th overall. His sideways driving style in his Mark 2 Escort was a real crowd pleaser.
Ciaran Kennedy Co driven by Paul McGinnis, brought his red Honda Civic across the line in 48th overall and 4th in class. The crew thoroughly enjoyed the day. Hot on his heals was David Carney. The young Aughagower man piloted his Citroen C2 R2 to a fine 49th overall only 7 seconds behind Ciaran Kennedy. This was only David’s second time using the little French pocket rocket his first being the Galway International Rally in February where he finished 22nd overall. At the finish David said “It’s all a learning process .We are getting there! I am feeling much happier with the car and my driving now”. David had a relatively trouble free day his only setbacks were two overshoots on stages 1 & 3.
Chrystal Culkeen from Castlebar was co-driving for Ruairi Maguire from Strabane they finished in 52nd overall and 7th in class 6.
Niall Morley from Bekan was to be the next man home and was to be given the honor of being runner up in the Bekan Challenge. Niall was speechless at the finish and was overjoyed to have been runner up to Gerry Ronan. He finished the rally 53rd overall and 5th in class.
Marcus Molloy & Damien Cleary from Foxford had mixed day. It started well with a clean run over stage 1 but things rapidly deteriorated on stage 2 with a spin and an overshoot. This was to set a trend for the remainder of the day. But the biggest moment was to come on stage 8. Marcus takes up the story “ We came around a tight left corner and the car broke away from me. There was drain on the outside and we slipped down” “Luckily we were carrying enough speed to get out with minimal time loss and damage but it was a big moment!”

Eoin McGreal with co-driver Jonathan Rice from Castlebar had a great day’s rallying. Eoin in his Vauxhall Chevette utilized every horsepower under the bonnet of the car to finish in 63rd overall. He drove the door handles off it all day and was a crowd favourite as the Chevette usually came into view going sideways!
Ballinrobe Mathew Murphy had John Burke shouting the notes. They were very happy with the result at the finish the event 65th overall and 7th in class. At the end of the event they were asked: Did you have any moments or incidents on the stages? “John quickly pointed out that every corner was an incident!”
Padraic Roche & Co driver Paddy O’Hora from Killala came home in 68th overall and 8th in the very competitive class 12 on a welcome return to the stages.
Coming home in 71st place was Kenneth MacHale from Knockmore he swapped his drivers seat for the navigators on the day and sat beside. But what he didn’t swap was his winning ways. Himself and driver Eamonn McCafferty took a start to finish victory in class 5. They completed the rally with no back breaks and with two broken suspension units! Just to show how hard they were pushing! Two places behind them in the class was Otto Gropler & Paul McGlinchey the Killala man brought his beautiful Ford Ka home in 83rd overall.
Otto was closely followed by Justin Ryan, who only on his second rally put in a great controlled drive to finish in 84th overall. Justin’s co-driver for the day was his father John Ryan. John kept him on the straight and narrow and the pair were delighted at the finish saying “It was an excellent event! Great stages and a great atmosphere, thoroughly enjoyed it”

Unfortunately it wasn’t all good news for the Mayo competitors as many of them fell by the wayside early on.
One of them was Sean McHugh. The Bekan man driving his distinctive BMW M3 Compact broke a driveshaft and was forced to retire thus relinquishing any chance he had at winning the “Battle of Bekan”. Another man’s rally who ended very early on was James Culliney his event ended not even a mile into the first stage with a sensor problem. James was very disappointed but he said he was happy he wasn’t beaten by Sean McHugh to the “Battle of Bekan”! James and his team worked tirelessly the day before the event to replace the clutch on the car which had broken. This made his early retirement even worse.
After the demise of McHugh & Culliney it was all down to Colin Loughney to bring the fight to Gerry Ronan, and that is what he did…. for a while. After stage one Colin was lying in an excellent 34th overall and thirteen seconds ahead of Gerry Ronan. Due to the second stage being much quicker Gerry pulled back seven seconds leaving the gap at five seconds going into stage three. But unfortunately that was to be as far as Colin could bring his challenge. Midway through stage 3 Colin cut a corner clipping a rock. This bent the steering arm and sent him into the ditch. The car suffered damage after the impact and their rally was over. An unfortunate end to a great run.
Barry Cuffe from Belcarra was to suffer a blown engine in his Ford Escort only two km into stage one.
Crossmolina man John Duffy driving his Honda Integra had to park up for the day on stage 4 as a broken driveshaft halted his progress.
One mans rally to end in spectacular style was Ciaran Walsh from Ballinrobe. Ciaran maybe took the rally phrase “Win it or bin it too literally” and unfortunately after leading his class for most of the morning he chose the latter. Ciaran Takes up the story “ The back just got light over a crest and at that stage I was a passenger. We ended up hitting a tree and that was it”
Well mixed fortunes for the competitors on there local rally.