Road Safety Authority (RSA) and Motorsport Ireland, organisers of the Mayo Rally event which is being staged on Sunday 13 March 2011, have issued a joint safety message to fans attending the sporting event to “Keep the Race in its Place”
RSA and Motorsport Ireland are running a safety campaign around the event to convey life-saving road safety messages to the public and to the high-risk target audiences viewing the event.

“We are getting involved because we want to talk directly to the predominantly young men who follow the sport,”explained Noel Brett, Chief Executive, RSA. “We want to remind them of the need to drive safely – hence our “Keep The Race In Its Place”message.”

“We’re expecting thousands of fans to attend the Mayo Rally,”explained Alex Sinclair, Chief Executive, Motorsport Ireland. “And by teaming up with the RSA we want to emphasise the importance of safety, both on the rally course and on the open road. And anyone attending the rally will be getting the message that ‘safety wins’ loud and clear.”
“Keep the Race in its Place”campaign reminds people to only watch the Special Stages from safety zones, never to enter prohibited areas, and between stages and afterwards, to follow the rally drivers’ lead by staying within the speed limits, by staying belted-in, and by never ever drinking and driving.
this example is well known rally driver Aaron McHale, Board Member of the RSA, successful rally driver and son of rallying legend Austin McHale. Aaron is helping to get across these important safety messages to the public as part of an advertising campaign.

“As a rally driver I am acutely aware of the need for safety,”explained Aaron McHale, “It is the top priority for all rally drivers and it should be the top priority for all road users. You simply cannot drive on open roads the same way that professional Rally drivers do on closed roads with a co-driver warning you of upcoming obstacles and hazards. Ordinary drivers just don’t drive under the same strict health and safety requirements and when driving on public roads must obey the rules of the road.”
travelling to and from the Mayo Rally on 13 March are urged to heed the message from the rally drivers – to ‘Keep the Race in its Place’, slow down, don’t drink and drive and always wear a seatbelt.

Programmes are now on sale
at the following locations:

Looking for Accommodation for the Mayo Stages Rally 2011? 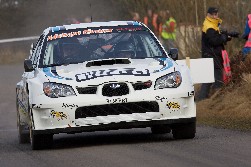