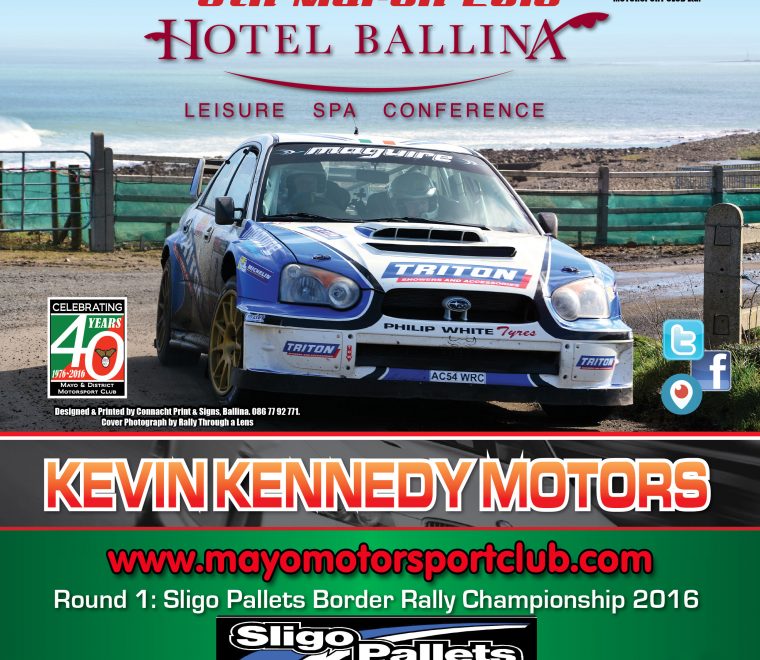 The months of preparation are almost at a close. Officials are checking paperwork one final time, Stage Commanders are conducting last-minute spot-checks, marshals are gathering their bibs and all-weather gear for a day out in the elements, and competitors are fastening bonnet clips and loading their rally cars onto their trailers. It’s time for the Hotel Ballina – Kennedy Motors Mayo Stages Rally 2016.

The sense of excitement is palpable as officials, spectators and competitors alike eagerly wait for 9am next Sunday morning when the leading cars will be flagged away from joint main sponsors and Rally headquarters, Hotel Ballina. It is no exaggeration to say that this Mayo Stages Rally is one of the most eagerly anticipated motorsport events in this country for a long time.

Great stages and a great venue for rally headquarters, huge support from local businesses in Ballina and surrounding regions, family entertainment from 5pm on Saturday in Ballina’s Market Square, and to top it all, a mouth-watering entry list.

And what an entry! Since it was revealed last week, the rally community has been abuzz with the sheer quality and quantity of the field that is coming together to compete in Mayo. More than one observer has said that a finer entry list has not be seen anywhere in a quiet a while. Testament indeed to the hard work of Clerk of the Course David Breen and his team at Mayo & District Motorsport Club.

From 3pm on Saturday, there will be an abundant of entertainment for the whole family; Scrutiny takes place in the front carpark of Hotel Ballina, where the public can see all the completion cars up close as they are inspected by the Motorsport Ireland Scrutiny team. The Rally show takes place from 5pm in Market Square, Ballina. Auto-testing demonstrations, RSA Road safety simulators, static car displays, name just a few of the events happening in the Market Square. Rally Merchandise and refreshments will be available all day. To round off the evening the leading rally crews will bring glamour and excitement as they gather in the holding area in Market Square, for what is a great opportunity for families to see these powerful machines up close.

A small army of volunteers is needed to ensure a safe running of the Mayo Stages Rally. If you would be interesting in lending your support to help out over the weekend and are over 18 years of age, please contact Chief Marshal Maggie Bonner on 085 7858890 – your assistance would be greatly appreciated.

Winner of last year’s event and former triple National Rally champion Niall Maguire (Subaru WRC) heads the entry.  The Monaghan driver won the National Rally Championship series in 1999, 2002 and 2004 and while he has finished runner-up on several occasions, a fourth title has, so far, proved elusive

Donegal’s Declan Boyle, who won the national series in 2015, occupies the number two slot in a top ten that is a lockout of World Rally Cars.  It’s been a race against the clock to have his Ford Fiesta WRC re-fettled after he crashed out of the Galway Rally at the beginning of February.  Last July, Boyle gave the Fiesta WRC car its national debut and victory on the Sligo Rally and he will be hoping that his appearance further up the Atlantic Coastline will also pay dividends.

Meanwhile, Fermanagh’s Garry Jennings (Subaru WRC) – the first driver to win a Power Stage in the Triton series will provide superb opposition in Ballina.  A former Tarmac champion, Jennings is regarded as one of the quickest drivers in Irish rallying.

Tyrone’s Paddy McVeigh utilised the Recent Birr Rally as a shakedown for the Mayo Rally and he expressed satisfaction with changes to the set-up of his Subaru WRC as he finished third overall.  The quality of the opposition continues at a high level with former Tarmac champion Derek McGarrity set to compete in a recently acquired Ford Fiesta WRC.

Having finished within the top three of the National series for the past three seasons Clonmel’s Roy White (Ford Fiesta WRC) embarks on another national bid in Ballina.  On his first Triton Showers National Rally Championship outing with the car – Roy was second overall in last year’s Fastnet Rally in Bantry, like the opposition, he will be keen to secure strong points in the west of Ireland.

It’s been 24 years since Warrenpoint driver Peadar Hurson drove his Opel Ascona to victory in the National Rally Championship.  He will begin his Triton Showers bid behind the wheel of the Subaru WRC that he powered to victory in last season’s Galway Summer Rally.  He is expected to be at the cutting edge through the nine stages in North Mayo.

Welsh ace Steve Wood (Subaru WRC) has earmarked the Triton series for his exploits across the Irish Sea, in 2014 he was one of a number of drivers to lead the series during the season.

Title sponsor Kevin Barrett (Subaru WRC) – another driver to use Birras a shakedown –  is seeded at number nine in the Triton Showers liveried Subaru WRC.  One of the most popular drivers in the series he will be aiming to make a positive start to the 2016 campaign.  The top ten is completed by the Subaru WRC of Tyrone’s Frank Wray.

Elsewhere, London based Cork driver Michael O’Brien on board the ex-Sam Moffett Ford Fiesta WRC has signalled his intentions to complete the full Triton campaign.  The 2013 Irish Forest Rally champion is also planning to use his Ford Focus WRC on some of the other rounds.

Another champion, the 2007 National Championship winner Aaron MacHale will contest the Ballina event behind the wheel of a Skoda Fabia S2000 while Cavan’s Stephen McCann will debut the ex-Denis Cronin Subaru WRC.

There is also a cracking entry in the two-wheel drive category.  Gary McPhillips, Jonathan Pringle, Frank Kelly, Chris Armstrong, Damien Toner, Ed O’Callaghan and Trevor Mulligan, all in Ford Escorts, should have a classic confrontation.

In the Junior section, the top three seeds are Meath pair Gary McNamee and Brian Brady and Kerry’s Mark Murphy, all in Honda Civics.

One of the top seeds No 12  Aaron MacHale has strong links with the area and his navigator Paul McGee hails from along one of the stages, there are a number of other locals participating including Ballyhaunis driver Shane Buckley (Honda Civic) seeded 42, Aidan Gannon is on the notes for No 46 Anthony O Brien (Mitsubshi Evo 9), Colin Loughrey  at No 59 has Seamus Murphy on the notes(Ford Escort), Castlebar’s Barry Cuffe has Westport man Stephen McGing alongside at No 62 (Ford Escort) and Foxford’s James McGreal  and Chris Mitchell are 63 (Mitsubishi Evo 6). Derek Bolton and Lorcan Moore are 68 (Subaru Impreza) Event joint main sponsor Ciaran Kennedy has Pat O Hara on the notes No 69 (Honda Civic) Jared Gill sits alongside Galway’s Ray Cunningham No 73 (Mini Cooper) Michael & Fergal Loughney in their fabulous orange Mk2 Escort are No 93. Foxford’s Alan Moran and David Loughney are No 95 (Peugeot 206). Former Mayo COC Padraic Roche returns to competing with Aimee Smith on the notes at 100 (Ford Escort) Derek McCarty returns to his Border prize winning seat with Stephen Reynolds at 102 (Honda Civic) Achill’s Brian Lavelle has Shane Byrne No 103 (Honda Civic). John Duffy and John Egan are No 111 (Honda Integra) Ronan Moore is 121 in his Ford Escort. All of Achill island are behind Peter McManamon and John McCarthy at 125 (Peugeot 205) Stephen Kelly is 126. Keith Jacob and Michael Carr are 128 (Ford Ka) Padraig Conneely and Liam Walsh return in their Toyota Corolla at 131

For spectators intending to visit the rally on March 6th, plenty of time should be allowed to get to the stages to park and find a safe viewing location, as some of the stages have only limited access. Always obey the marshals and follow their instructions, as they are there to ensure that everyone has a safe day’s rallying. A Rally Programme with a detailed map is available to purchase in the area.

Information on the day

The 2016 Mayo Stages Rally is continuing the high standard of previous years with news and information available to rally fans. In order to keep competitors and spectators as informed and up-to-date as possible, Mayo & District Motorsport Club utilizes a range of communication tools in the build up to, and during rally week-end. The Club is already providing regular updates via its Twitter, Facebook and Periscope accounts – MayoMotorClub. Also event information is available on the clubs website www.mayomotorsportclub.com. On the Sunday of the event when the rally itself roars into action, regular live updates and interviews will be broadcast on Mid West Radio’s Sunday Sports Show. www.midwestradio.ie & 96.1fm