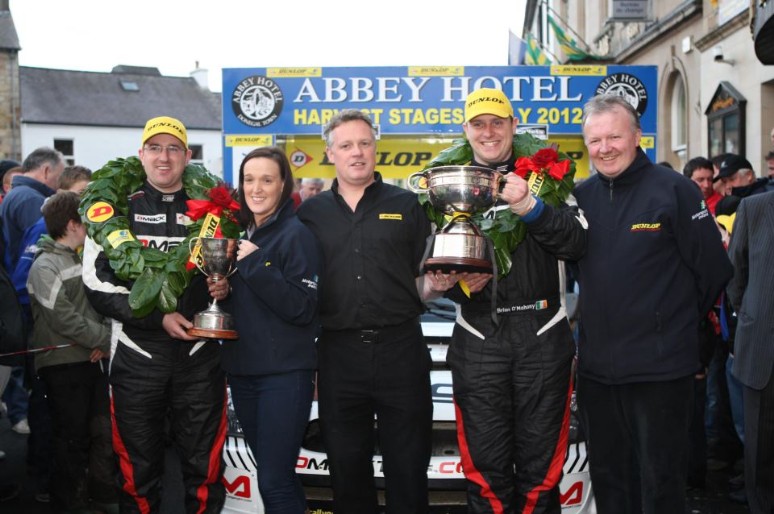 John Higgins from Kiltimagh has clinched the 2012 Dunlop National Rally Championship. Co-driving for Brian O’Mahony in a Subaru WRC, the Cork – Mayo pairing took the prestigious title against stiff opposition with a measured drive on the Donegal Harvest Rally on Saturday.

With just a slender five point championship lead heading into the season finale over title rivals Thomas Fitzmaurice / Fionn Foley, and with Niall Maguire / Enda Sherry also still in the title hunt, O’Mahony and Higgins’s title bid didn’t get off to an ideal start, with O’Mahony hurting his wrist on the opening stage, and struggling thereafter to maintain his pace on the bumpy Donegal tarmac.

With a number of quick non-championship drivers competing on the ever-popular Harvest Rally, the title protagonists were concentrating on their own battle, leaving the others to fight for the overall lead. After swapping seconds and positions over the opening tests, by stage six of nine, O’Mahony and Higgins had moved ahead of their title rivals. It was a position they were not to relinquish, returning to a rapturous reception in Donegal town in third place overall, the Dunlop National Rally title theirs on just their first full year competing in a World Rally Car.