The sand and heat may have made for an alien environment compared to the wintry wind and rain of home, but for the two Mayo & District Motorsport Club co-drivers who tackled the Qatar International Rally at the week-end, it was quickly a case of business as usual. Both Killian Duffy and John Higgins navigated their respective Middle East drivers Abdulaziz Al Kuwari and Majid Al Shamsi to challenge for overall and category wins on the difficult desert rally. While the Al Shamsi / Higgins pairing ultimately failed to reach the finish, it was podium joy for Al Kuwari and Duffy, bringing their Seashore Qatar Rally Team Ford Fiesta home in a superb third place overall. 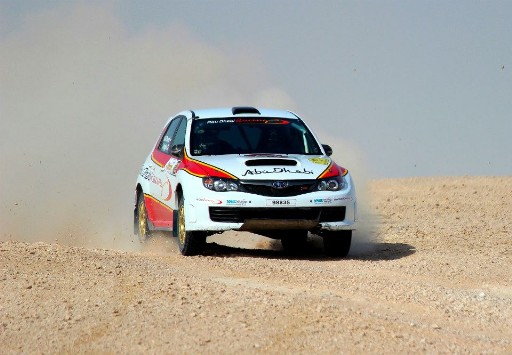 Based in the Qatari capital of Doha, the Qatar International Rally was the opening round of the FIA Middle East Rally Championship, and attracted all the top local drivers including current World Rally stars Nasser Al Attiyah competing on his home event, and the UAE’s Shaikh Khalid Al Qasimi. For Killian Duffy, it was a return to familiar haunts, the Crossmolina native having competed in the Middle East series for a number of years, and hoping for a strong result alongside last year’s rally winner Al Kuwari.

For reigning Irish National Rally Champion co-driver John Higgins though, this was a whole new ball-game, the Kiltimagh man making his desert rallying debut alongside Majid Al Shamsi as part of the same Abu Dhabi Racing team as former Ford works driver Khalid Al Qasimi, but competing in a more showroom specification Subaru Impreza. Speaking after the recce before the rally started, John was looking forward to his first Middle East event. “It [the recce] was quite different than what I’m used to, as in the navigation is quite challenging. Sometimes it can be difficult to see what track you should be on – or even see a track!”
From the start, the established World Rally stars of Al Attiyah and Al Qasimi set the pace, with the latter perhaps surprised to lead the event at the half-way point ahead of the multiple previous winner and former Dakar rally winner. Al Kuwari and Killian Duffy suffered from too stiff suspension on their Fiesta on the opening stages, and were effectively out of contention for overall honours by the second stage after going off track and losing one and a half minutes. Nontheless they still managed to hold on to third place overall by the end of the first day.
It was also a strong day for Al Shamsi and John Higgins, impressing observers to finish the first day in the lead of the Group N category.
Day two saw Nasser Al Attiyah come home to record his tenth Qatar International Rally success after Khalid Al Qasimi suffered a puncture, while after the dramas of the opening day, Al Kuwari and Killian Duffy consolidated their podium place to record an excellent result behind the two established World Rally drivers. Speaking at the finish, Killian was happy with the week-end’s actvities, noting that once they had sorted their suspension on day one, things had gone well, including a second overall fastest time on stage 5.
“We were too far behind the leaders to catch them and we had a comfortable advantage over 4th place, so we set a safe pace. Our times were still in touch with the leading drivers but the time loss on day 1 was impossible to make up. 3rd overall is a great start to the championship, the next round is Kuwait in March, but firstly we do a 1 day local rally in Kuwait in February, and WRC Mexico, so a busy few months ahead!”.
After their strong opening day performance, Al Shamsi and John Higgins were disappointed to have to retire on the opening stage of leg 2 with rear suspension failure on the Subaru Impreza. “We didn’t hit anything but the rough stages on day 1 took their toll I would say” said a philisophical John, after what was an eye-opening but encouraging Middle East Rally debut. “The rally was extremely challenging. I never concentrated so hard on stages before. You have to call the notes as normal, but the road might have completely different lines on it after a few cars pass, meaning some corners are more open and faster, and some will have disapeared altogether. You have to make sure that we stay on the rally route using the GPS at the same time. Then you can’t always see the road! Tough going, but overall very enjoyable”.
Like his fellow Mayo co-driver, John will be seeing a lot more of the desert in 2013, as he has signed up to do the full seven round FIA Middle East Rally Championship with Majid Al Shamsi and the Abu Shabi Racing Team. His next event will be the Kuwait International Rally in March.

Amid wintry showers and the promise of snow in the west of Ireland, two Mayo lads have headed for the Middle East.
Killian Duffy from Crossmolina and John Higgins from Kiltimagh, both members of Mayo & District Motorsport Club, left Ireland in the last few days to compete in next weekend’s Qatar International Rally.
Killian is co-driving again this year for Qatari driver Abdulaziz Al-Kuwari in a Seashore Group sponsored Ford Fiesta RRC. Last year, they narrowly missed out on winning the Middle East Rally Championship in a Mini JCW RRC. This year, they are contesting the full Middle East Rally Championship, and also the WRC-2 Championship.The first of six rounds of the Middle East Championship kicks off with Qatar. Then it’s off to Kuwait in March, Jordan in May, Lebanon in September, Cyprus in October and Dubai in November. The Middle East car is brand new and is prepared by Motortune in Lebanon.
They are also competing in three warm-up local rallies, in Kuwait, Jordan and Lebanon. In WRC 2, which is the new title for the super 2000 World Rally Championships, Duffy and Abdulaziz are contesting at least six WRC events, starting with Mexico in March, Portugal in April, Greece in May, Sardinia in June, Germany in August and Spain in October. Their car will be run by the Ford M-Sport World Rally Team for the WRC 2 campaign.
It will be a busy year also on the home front for Killian as he hopes to develop further the Ultimate Rally News website, and Ultimate Rally News TV shows, and his own commercial pacenote business requires a lot of time and work, where he is Ireland’s leading supplier of commercial rally pacenotes for every rally in Ireland.
John Higgins, who holds the prestigious, 2012 Dunlop Irish National Rally Co-driver Champion title, is swapping Irish tarmac for the challenge of the Middle East desert. He is joining Majed Al Shamsi as part of the Abu Dhabi Racing team, in an N15 Subaru Impreza. He is looking forward to the opening round of the FIA Middle East Rally Championship, and hopes that a good solid performance will lead to more rounds on the 2013 campaign.
John, who was recently heard use the phrase that Killian Duffy coined a few years ago “Have gear — will travel” readily acknowledges Killians’s support and the help that www.onthepacenote.com will give him in helping him get acquainted with his new surroundings, and teaching him on how to deal with the huge differences between rallying in deserts, and rallying on the Irish stages which he is more used to.