Duffy’s Delight Down Under

Abdulaziz Al-Kuwari and Killian Duffy were victorious in the WRC 2 class of Rally Australia and have moved to the top of the FIA championship standings.
The Qatari and Mayo partnership that rally the Seashore backed Ford Fiesta RRC, began Sunday’s last leg of the four day event with a comfortable 1min 13sec lead over Ukrainian, Yuriy Protasov. They lost just 0.4sec of this margin by the end, claiming top WRC2 crew and finishing in tenth place overall. 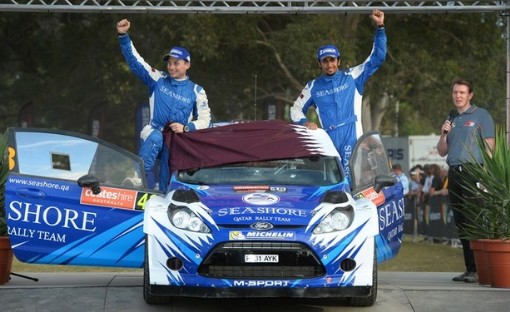 It wasn’t all plain sailing for the pair, after moving into the lead on stage 12, they continued to push hard, sometimes a little too hard. They were lucky to get away with a spin on stage 15 that seen the fiesta end up in a field. With calm restored they headed for service in Coffs Harbour, not relinquishing their lead again.

It was the third WRC 2 victory of the season for Al-Kuwari and Duffy who also took maximum points on the other long-haul rounds in Mexico and Argentina. The pair now lead the WRC 2 drivers and co-drivers standings respectively.

“Three wins this year, leading again and I equal my best result which was 10th in Greece, so it’s feeling really good,”said Al Kuwari.“I’m pleased to have made top-10 in an RRC car, my pace was really good, even against the top drivers, and every time the gap is getting closer. The team did a great job, as did my co-driver Killian, it’s been a very nice weekend.”

The WRC 2 does not have a fixed calendar. Instead, teams and drivers competing in the series are free to contest any of thirteen rallies that form the 2013 World Rally Championship. They must nominate up to seven events to score points in, and their best six results from these seven events will count towards their final championship points score.
There are three events left in the 2013 calendar, and Al-Kuwari and Duffy’s last nominated event is also the last event of the series, Rally GB in November. While nothing is decided yet, the pair have put themselves firmly in the driving seat.
Mathematicians in the Mayo and District Motorsport Club already have the calculator’s at-hand, hoping that over the remaining rounds, the Claremorris based Crossmolina man can hold onto his co-drivers lead to become World Champion.