Reflecting On A Job Well Done

Afterwards, the overwhelming sense was of relief. Satisfaction at a job well done, delight at seeing the large crowds on the rally stages and hearing the positive feedback from the competitors, but above all relief that the event had passed off safely, that the months of hard work preparing for the 2012 McWilliam Park Hotel and Fleet Transport Magazine Mayo Stages Rally had all been worthwhile. 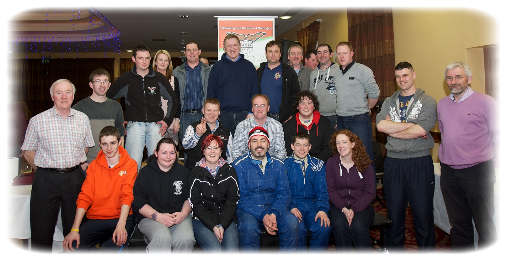 Clerk of the Course Padraic Roche was entitled to enjoy the platitudes coming his way after what was another hugely succesful event for Mayo & District Motorsport Club. The Killala man has racked up thousands of miles since last November, not just travelling between his home and Claremorris, but also covering every inch of the rally route, trying to ensure every possible scenario of what possibly could go wrong was prepared for. He was not alone, his team of Deputy CoC David Jordan, Assistant CoC Liam Healy and the Stage Commanders and Deputy Stage Commanders have all become famiilar faces to residents of the rally route over the past months.

“At times you wonder if it will ever all come together” reflected Padraic at the rally finish on the trials of organising an event of this magnitude. “Thankfully I had a great team supporting me and any problems that did arise were quickly addressed. I’m delighted that this week-end has gone so well, and a huge thank you has to go to the people of Claremorris and all along the rally route who have been so accommodating and made it possible for us to run this event. We’re also so appreciative of the support of our title sponsors The McWilliam Park Hotel and Fleet Transport Magazine, and all our other sponsors, as well as the Claremorris Chamber of Commerce and local businesses. I think the crowds here and the huge buzz around the town both today and yesterday for the Ceremonial Start are a reflection on what it means to have the rally in this area.”

That sense of a special occasion was reiterated by many people over the rally weekend. At the Ceremonial Start on Saturday evening where a large crowd was in attendance, dignitaries including John O’Mahony TD, Dara Calleary TD, the Chairman of Claremorris Chamber of Commerce Eugene Waldron, and local councillors all noted the importance of having such a major sporting event in Claremorris in what is otherwise a quiet time of year for businesses.

At the rally finish Seamus Gallagher of The McWilliam Park Hotel said that having the rally in the area had been a real boost to Claremoris in the past three years. “We’re delighted with the support from everybody, both participants and the Mayo Rally Club, and I’d like to congratulate each and every one of them for the work they put into this outstanding rally.”

Event Secretary Kathleen Kennedy singled out The McWilliam Park Hotel for special praise. “As a rally headquarters we could hardly wish for a better venue. It is ideally located just off the N17, and with the service park and Parc Feirme adjacent to the hotel, combined with the excellent facilities, it is no wonder it is so popular with everyone involved with the rally. I’d like to extend a personal thanks to Lesley Joyce and Fergal Ryan from the hotel for their unstinting support for the past three years.”

Event sponsor Jarlath Sweeney of Claremorris based Fleet Transport Magazine was another to reflect on a job well done. “I am delighted to be associated with such a successful event and congratulations to Niall Maguire who we are very familiar with through our magzine and his international road transport business.”