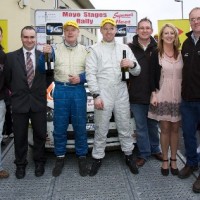 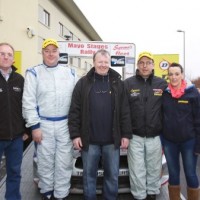 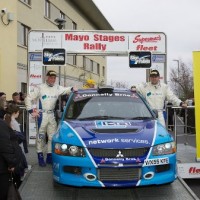 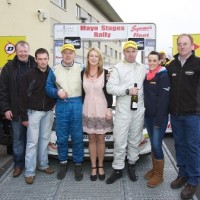 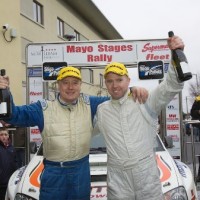 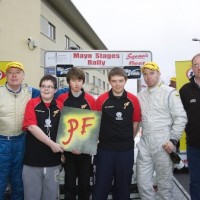 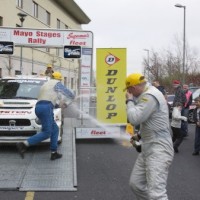 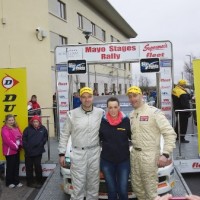 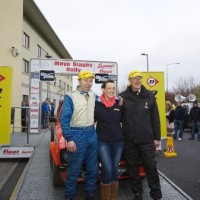 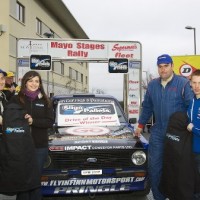 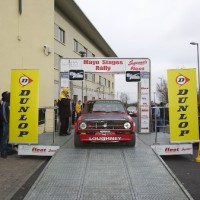 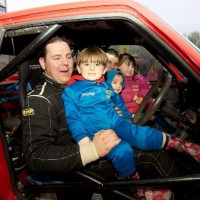 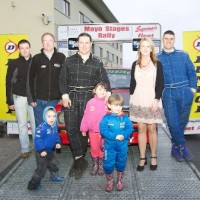 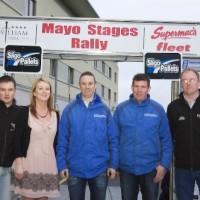 Niall Maguire rolled back the years to claim victory on the McWilliam Park Hotel and Fleet Transport Magazine Mayo Stages Rally on Sunday. With co-driver Enda Sherry, the Monaghan man had to overcome a tough battle with team-mates and Subaru WRC rivals Kevin Barrett and Sean Mullally, before a puncture for Barrett on the penultimate stage proved decisive in deciding the outcome. It was Maguire’s third victory on Mayo soil and puts him into the lead of this year’s Dunlop National Rally Championship after two rounds, while Barrett had to be satisfied with second place after winning this event last year.

Early morning drizzle had left the roads in very slippery conditions for the opening loop of stages, catching out many competitors. Among them were the number two seeds Thomas Fitzmaurice who lost two minutes with a spin in their Subaru WRC, dropping them to 85th place. Thereafter it was a case of damage limitation and the Kerry crew were ultimately very happy to finish in fifth place overall.

Brian O’Mahony and his local co-driver John Higgins from Kiltimagh were held up by the Fitzmaurice incident on stage one in their Duggan’s Sales & Recovery Claremorris sponsored Subaru WRC, but worse was to follow on the second loop of stages when smoke followed by fire enveloped the cabin. Luckily there was no permanent damage, but the Cork / Mayo pairing were disappointed to have to retire early on an event in which they had high hopes of victory. 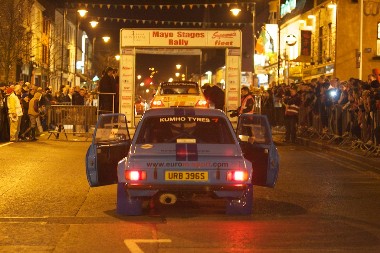 Barrett had established a fifteen second advantage over the hard charging Donagh Kelly / Kevin Flanagan in a Group N Mitsubishi Evo as the competitors returned to first service with Maguire and O’Mahony close behind, but as the roads started to dry it was Maguire who started to push the pace, beating his team-mate on each of the following three tests to arrive back into second service tied on time with the Maynooth driver.

A close finish looked inevitable after Barrett struck back on stage seven, regaining the lead by two seconds. His chances of a repeat Mayo win were struck a major blow on the following test though, when the Subaru got a puncture, putting Maguire back in front by five seconds with one stage remaining. The Monaghan man was duly fastest again on the final stage, to claim a popular win back at rally HQ, the McWiliam Park Hotel.

Third place went to Donagh Kelly and Kevin Flanagan who were the highest placed Group N competitors in their Mitsubishi Evo. Indeed the Donegal crew had been in contention for overall honours for much of the day until drying roads handed the advantage back to the World Rally Cars.

Tipperary’s Roy White and James O’Brien were happy with their run to fourth in their Rover MG ZR, Roy very happy with the car after suffering problems on the opening National Championship round in Birr. Behind Thomas Fitzmaurice in fifth were the Dunlop Championship Group N winners, Donegal brothers Trevor and Kenny Bustard in their Mitsubishi.

Seamus Leonard and John McCafferty were initially showing atop the leaderboard but a two minute penalty ultimately kept them down in seventh place, Seamus just happy to post decent stage times. On a day that proved challenging for rear wheel drive cars Camillus Bradley and Crawford Henderson from Co. Derry once again proved Masters of Mayo, winning the Dunlop Championship Mark 2 prize for top Escort crew. Two other Escort crews rounded out the top ten, Paul Barrett and Peter Ward from Tyrone ahead of Cavan’s Jonathan Pringle and Martin Byrne.

Once again Mayo & District Motorsport Club received many plaudits for runing a highly successful rally. Testing stages and flawless organisation meant the event ran without hardly a hitch, while the good weather attracted large crowds to see the action at the Ceremonial Start on Saturday as well as on the rally stages. For the hard worked organisers at the rally finish it was a case of looking forward to a well deserved rest but roll on 2013.

A huge thank you to all who helped make this year’s Mayo Stages Rally a great success. Well done to everyone involved… 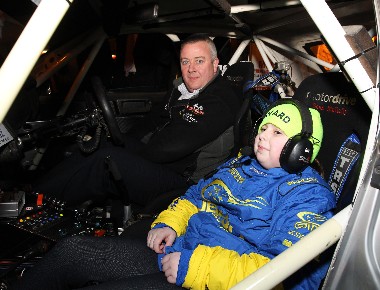