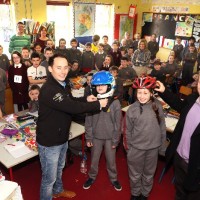 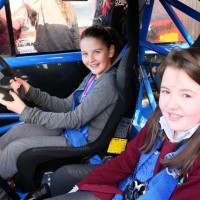 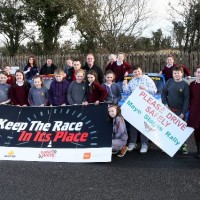 Local Crews Ready For Action On Mayo Stages Rally
No fewer than 48 local competitors will be taking part on their home rally this weekend, all hoping for a successful and safe rally.
Mayo & District Motorsport Club members Aaron MacHale and Kiltimagh’s Eamonn Walsh head the local runners at number 17 in their Supermac’s backed Mitsubishi Evo 9.
At number 28 is David Carney from Westport in his newly acquired Citroen DS3-R3T. Having been highly successful in his Citroen C2R2, he is hoping to continue that form in the more powerful new mount backed by Carney Quarry’s.
At 30 are Ballinrobe based Sligo man John Warren, and Ruthann O Connor from Kilmaine, in their McHale’s Engineering sponsored Toyota Corolla, the pair set some impressive times in last year’s event. Two places behind them, Sligo’s Darragh Mullen is navigating for David Leonard in a class 20 Mistubishi Lancer. The class 12 Ford Escort of Colin Loughney is at 41. South Mayo based Colin is likely to be challenging for class honours.
Aidan Gannon from just out the road in Tubbercurry, navigates for Anthony O’Brien in a class 20 Evo 8 running at number 48.
Shane Buckley is in a class 11 Honda Civic running at number 52, navigated by Westport’s Keefe Kilcoyne.
There could be a battle for local honours in class 15 as Derek Bolton and Trevor O’Connell from Ballaghadereen come up against Kenneth McHale and Derek McCarthy from Knockmore. They will pit their very similar looking white Subaru Impreza’s against each other. James McGreal from Foxford makes a popular return to rallying in Mitsubishi Evo with Chris Mitchell on pacenote duties. Special mention also for Galway based, Knock native, Sharon Egan also competing in class 15, where she is navigating for Kieran Donohue.
UK based Westport man Ed Muldoon competes in a group N Mitsubishi Evo 9 running at number 72.
Joint main sponsor Ciaran Kennedy from Kennedy Motors, Ballina & Belmullet is at number 76 and has Paddy O’Hora alongside him on the notes.
Former Mayo Motorsport Club chairman Sean McHugh from Bekan, fresh from finishing second in his class on the Galway International, has his fabulous sounding BMW at number 85.
At 97 is Belcarra man Barry Cuffe and who takes his Cuffe Car Sales backed rear wheel drive Ford Escort out on his local event, along with Shane O’Brien on the notes.
Husband and wife team Keith and Sandra McFadden from Castlebar are at 101 in a class 7 Clio.
At 103 is the West Tyre Ballinrobe sponsored class 11 Corolla of Mayo & District Motorsport Club Chairman Matthew Murphy accompanied by his brother Ronan.
Club secretary John Duffy takes his class 7 Honda Integra out for his local event. The Crossmolina man has John Egan in the navigator’s seat.
Ballina pairing Tony Langdon and Eddie Quinn take on their home stages in a class 6 Honda Civic.
Former rally official David Doherty from Ballinlough has Cormac Lyons on the notes as he swaps the organising for competitive action in a Peugeot 306.
Darragh Devine with Paul McGee hope to repeat last year’s solid performance in their Honda Civic, number 134 on the road.
At 135 will be Patrick Durcan and James Gilmartin from Bonniconlon in their class 9 Vauxhall Nova.
The Greavy family from Bonniconlon are well represented on the entry list. Trisha, competing in her first ever event will be driving a Honda Civic, with Darren Gilmartin on the notes. Her brothers Terry and Brendan Greavy are one place ahead of their sister, at 138 competing in a class 9 Ford Escort.
Martin Cawley and Kenny Langan are yet another crew from Ballina competing on their home stages using a class 10 Peugeot 205 they have number 140 on their doors..

Junior Rally
The hotly contested Junior category sees many locals vying for honours. Defending his crown from 2013 will be Shrule’s Noel Murphy after winning the Mayo Junior category on his first foray into stage rallying 12 months ago. His confidence should be high after securing the Mayo Young Drivers title for 2013 in his M&R Motors/Westtyre backed Honda Civic. He will have some stiff local competition with two former Mayo Young Driver’s Champions also competing in the Junior category. Alan Moran from Foxford has a Peugeot 206 at his disposal, while Headford’s Justin Ryan will have Andy Walsh from Ballinrobe navigating him in their group N Honda Civic which is sponsored by Arrabawn, Talco Group, ProActive Security Systems Ballinrobe and Sweeney Oil. Experienced autocross competitor Stephen Doherty from Foxford makes the jump to stages rallying in his recently beefed up Moran Nurseries backed Opel Kadett. Stephen has Jared Gill from Bofeenaun, sitting with him for this event.
Best of luck and a safe day’s rallying to all the local competitors.

Before the flag drops….
Full details of maps and times will be available in the rally programmes which will be on sale in shops and garages around the Ballina area from Friday evening, priced at €5.
Online users can follow Mayo & District Motorsport Club’s Twitter and Facebook accounts which will be continually updated during the week and week-end with all the latest news, times and competitor quotes, or can check here on the club website.
Regular updates can also be heard on Mid West Radio during Sunday’s event as live links from the service park will run during the Sunday Sports show on 96.1 and www.midwestradio.ie