A Patrick’s Weekend to remember!

With a new car to adapt to, it was always going to be a difficult rally. The latest specification McKinstry Motorsport Subaru S14 WRC is a league ahead of their previous car, with John exclaiming “It’s a rocket ship” and Brian commenting that “It’s unlike anything I have ever driven”. This new machine, coupled with some of Ireland’s most demanding tarmac stages, ensured that it was always going to be an uphill battle for the pair. 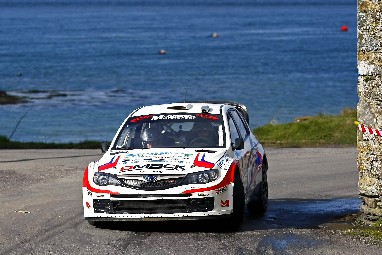 The rally got underway on Saturday and consisted of six tough stages to test the drivers. Brian and John were fastest out of the blocks recording quickest time on the opening stage. When they reached the end, all was not well inside the car. Brian noted “We lost some time at the beginning of the stage due to some confusion, I am still getting the feel for the car”. The next car onto the stage was Kevin Kelleher in his Subaru but towards the end of the test, his car caught fire and the following competitors had to stop to assist. This meant that the following crews were awarded Brian’s fastest time for the stage.

Stage two saw the duo drop to second place behind fellow Subaru driver Denis Cronin. They were set to drop even more time to Cronin on stage three, when the car stalled on the start line and dropped them roughly ten seconds. At the first service of the day the pair had dropped from first after stage one, to fourth after stage three, over twenty seconds behind rally leader Cronin.

With the car was fully checked over by the McKinstry Mechanics in service and a fresh set of DMack tyres fitted, it was out to the next loop of three stages. Being unfamiliar with the new car showed, as Cronin continued to take time from them. When they re-entered service after the three test, Cronin had a massive twenty-eight second advantage. As day one of the rally came to a close the Cork-Mayo duo would have to claw back time on day two of this iconic event to claim the victory.

A beautiful sunny morning greeted the spectators and crews on day two of the West Cork Rally. Brian and John had it all to do and only six stages to do it, as they were trailing Denis Cronin by twenty-eight seconds. Stage seven of the rally started well for the two who ended the stage only point one of a second behind Daragh O’Riordan in his new Ford Fiesta WRC. This illustrates how close it is at the top of Irish Rallying, only point one of a second separated the two drivers after seventeen kilometers of flat out rallying! 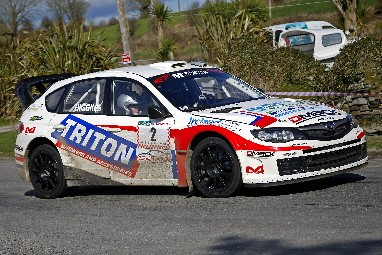 On stage eight, the duo recorded their second fastest time of the rally, a staggering nineteen seconds faster than Cronin to slash his lead down to four seconds, with four stages remaining. Brian commented at the end of the stage that “Yes we are going well now! We have softened the suspension and altered the center differential, it feels much better”. Another fastest time on stage nine left them trailing Cronin by two seconds heading into the final loop of three stages.

The stage wins kept coming and on stage ten they moved into the rally lead, but it was short lived as stage eleven Cronin fought back and was fastest to move into the lead going into the final stage. It was going to be a photo finish.

Brian’s father, Frank a rallying legend in his own right, had never won the West Cork Rally, despite coming close on multiple occasions. There was pride and ego at stake going into the final stage. They lined up on the start line, knowing that they had to complete the seventeen kilometer test five seconds quicker than Cronin to win the rally. They blasted off and pushed hard, towards the end of the test they came across the stricken Subaru of Cronin, who had rolled out of the rally, thus handing them the victory!

Upon reaching the end of the stage the emotions were palpable, as Frank congratulated his son, and Brian and John celebrated their first West Cork Rally win! A Patrick’s weekend to remember indeed!