The date: June 12th 2011. The venue: Harrington’s Quarry near Swinford, where Mayo & District Motorsport Club was running its second loose surface autocross event of the year. Having completed their opening runs, the drivers were keen to see the times, to find out who the pace-setters were on this particular day. Multiple winner and reigning Mayo Autocross champion James McGreal scanned up and down the sheet before pointing to a name near the top of the leaderboard. “Look at his time. That lad is on some serious pace in that car”. 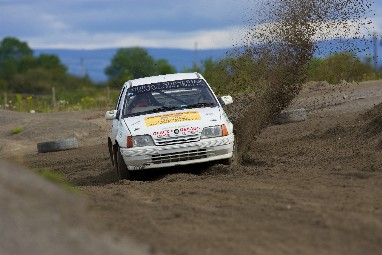 The lad in question was Alan Moran, and throughout the course of 2011 the young man from Foxford regularly raised eyebrows with his speed and committment. Wringing every last inch of pace out of the twenty one year old Opel Kadett he shared with his friend and rival Stephen Doherty, it became a regular occurence for Moran to embarass drivers in far faster and more sophisticated machinery. Always in the battle for class honours, his target in just his third year of competing was to challenge for the Young Driver title – the championship organised by Mayo & District Motorsport Club geared specifically for young drivers starting out in motorsport. Maximum points on three of four counting rounds ensured the title was his, his only defeats coming at the hands of of his team-mate Doherty.

“Yes, having Stephen driving the same car as me definitely drove me on” smiles Alan, recalling the closely fought battles between the two. “You always want to beat your team-mate so we just pushed each other really hard. He’s a very competitive driver so it was great to come out on top – this time.” 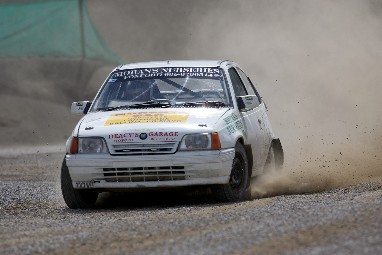 That was then, and while Alan definitely hasn’t turned his back on autocross, a new challenge is looming for the twenty year old mechanical engineering student. In less than two weeks time on March 11th, he is planning to make his stage rallying debut on his home event, the Mayo Stages Rally. It promises to be a very different experience and Alan is under no illusions about the challenge ahead.

“My aim is just to finish the rally, get as much experience as I can.” he explains. “So much is new, from driving on tarmac, to having a co-driver and using pacenotes.” Speaking of co-drivers, he has yet to get one. Just one more thing to sort out in the rush to be ready for the event. Using his trusty autocross car, getting it ready for stage rallying has required work on the roll-cage and a respray to freshen its appearance. Mechanically though it is unaltered from its last autocross outing in October. 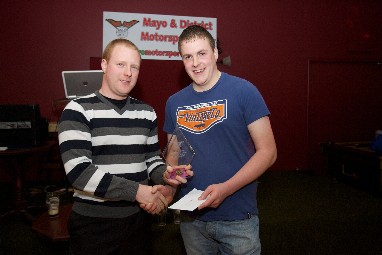 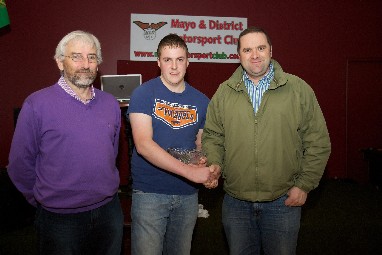 Alan is grateful to his sponsors for supporting him in his motorsport career to date, with MD Roofing Services of Kiltimagh, Moran’s Nurseries Foxford, Deacy’s Garage Foxford and Murphy’s Bar Lahardane among those backing him. After the Mayo Stages he is hoping to tackle another stage rally or two before the year is out, but his priority once again will be autocross. He believes it is the ideal motorsport disipline for anyone interested in getting involved in the sport. “Autocross is a very affordable form of motorsport, especially when you share a car like Stephen and I have done. The Young Driver Challenge is a great opportunity for young drivers, and I want to say a big thank you to Mayo & District Motorsport Club for setting up this initiative. The prize money I won last year has helped me move forward into stage rallying by entering this year’s Mayo Stages Rally, and I’m really looking forward to that, but I certainly plan to keep competing in autocross for the forseeable future”.